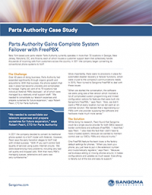 New York-based auto parts retailer Parts Authority currently operates in more than 70 locations in Georgia, New Jersey, Maryland, DC, and Arizona, each of which houses a customer support team that collectively handle thousands of incoming calls from customers across the country. In 2011 the company began converting its conventional phone systems to VoIP.

Over 40 years of doing business, Parts Authority had expanded signi cantly through organic growth and acquisitions. With that success, the phone system that was in place had become unwieldy and complicated to manage. Eighty per cent of its 70 locations had individual Asterisk PBXs deployed – all of which were managed by a relatively small support staff. “We needed to consolidate our telecom expenses and prepare ourselves for future expansion,” says Robert Pesiri, CTO for Parts Authority.

“We needed to consolidate our telecom expenses and prepare ourselves for future expansion,” says Robert Pesiri, CTO for Parts Authority


In 2011 the company decided to convert its traditional phone system to a VoIP model with Asterisk. However, Pesiri says the early transition stages to VoIP met
with limited success. “With IP you can’t control QoS [quality of service] using public Internet circuits. We were experiencing many problems, including very bad call quality and dropped calls. With that many PBX’s managing queues, extensions and users was
very cumbersome.”

More importantly, there were no provisions in place for automated disaster recovery or failover functions, which were crucial to the company’s communications needs. In 2015, Pesiri turned to Sangoma FreePBX to deal with these issues.

“When we started the conversation, the software
we were using was a free version which involved a lot of complicated custom programming and limited con guration options for features that were built into Sangoma’s FreePBX,,” says Pesiri. “Also, we didn’t want a PBX at every location; but we did want an on- premise solution. We realized that a regionalizing our PBXs with one provider supplying the software and hardware made much more sense.”

While doing his research, Pesiri found that Sangoma could be a single source provider for both SBCs (session border controllers) and software (FreePBX). “I liked that,” says Pesiri. “I also liked the fact that I didn’t have to have a hosted system, because we wanted to maintain control over our SBCs, PBXs and inbound trunks.”

One FreePBX feature the team loves is the factory default settings for phones. “When you boot up a phone, you just have to put in the extension number and it automatically registers,” says Pesiri. “Because we’re always adding or moving phones around, it makes con gurations and updates so much easier. Everything is literally out of the box and easy to support.”

Pesiri also appreciates the direct-dial reporting he gets from FreePBX. “That’s something we weren’t able to get before. That really helps us out.”

FreePBX allowed Parts Authority to establish regional PBXs, which took them from 50 primary PBXs to
three. Today all locations are on an MPLS (multiprotocol label switching) fully meshed network with SIP trunks into four locations. “For example, one SIP trunk goes
to Georgia, another to DC and another to New York,” explains Pesiri. “So we have three primary PBXs with three primary SBCs and three SIP trunks from Verizon. A fourth SIP trunk and SBC house three additional backup PBXs in the Bronx for high availability and disaster recovery.”

Here’s a low level explanation how it works: An incoming call is sent over a SIP trunk via the Sangoma SBC to the primary PBX for that region. If the SIP trunk or SBC is down for any reason, the network will send the call over a backup SIP trunk and SBC to the primary PBX and ring users’ four-digit extensions. If for any reason the primary PBX is down, all incoming calls are sent to the backup PBX and rings all of the ve-digit extensions. There is no need for the phone to fail and register to another PBX. Along with this design there are many other advantages like reporting
and maintenance.

Parts Authority now has complete failover. “Because our phones are registered to a primary and backup, they will be routed through the most available PBX,” says Pesiri. “Traditionally a phone would have to register to the backup PBX which could take a minute or more
to execute; which would happen even if there was a momentary blip in the network. Now I never have to worry because the phones are registered to both the primary and the backup at the same time. The model works perfectly, and we never miss an inbound call.”

The company has also reduced its reliance on multiple providers to two carriers. “If Verizon ever goes down, MPLS calls can automatically be forwarded to our backup VOIP provider over the public internet. So we have redundancy from Point A to Point Z,” Pesiri says.

Before moving over to FreePBX and Verizon SIP trunks, dropped/missed call rates due to miscellaneous PBX and circuit issues ranged from three to ve percent, he adds. “Now we’re under one percent. And the support and maintenance has dropped dramatically because there are fewer boxes to worry about. With FreePBX we can support our devices, update software and manage holiday scheduling for each region. It used to take four people to manage our phone systems. Now we can do it with one.”

He notes that his team has only scratched the surface of the features and capabilities of FreePBX and the Sangoma equipment. “We’re excited to spend time on learning more and introducing the features to our users. What we do know is how easy it has been to grow and expand with this system.”