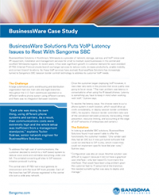 A large automotive parts warehousing and distribution organization had one main site and eight branches throughout the U.S. Each warehouse operated on a different landline phone system using different carriers; and there was no integration between locations.

“Each site was doing its own thing, using different phone systems and carriers. As a result, their communications costs were extremely high and the whole setup was inefficient from a management standpoint,” explains Tucker Sukraw, senior network engineer for BusinessWare Solutions.


To address the high cost of communications, the customer decided to switch to a VoIP-based system to reduce voice costs and centralize everything under one bill. This entailed converting all sites to SIP (session initiation protocol) trunking.

The central site’s IP PBX had a local gateway to interconnect with the local SIP trunk provider. Each of the branches had SIP phones registered to the central site over a wide area network.

was clear very early in the process that voice quality was going to be an issue. “The main problem was latency in conversations when using the IP-based phones. Latency is something you have to keep in mind when working with VoIP,” Sukraw says.

To resolve the latency issue, the choices were to put a phone system in each location, which would drive up costs considerably, or deploy session border controllers (SBC), he explains. (Session border controllers take care of the conversion between protocols, transcoding, threat prevention, resource limiting, and accounting at the edge of VoIP networks of enterprises and carriers.)

In looking at available SBC solutions, BusinessWare Solutions found most weren’t able to offer the functionality the customer needed. “One vendor said they had an SBC but it was just tunnel software that could not interface to SIP trunks, which meant they could not implement specific local dial plan rules,” Sukraw says.

“Configuration was also an issue. Another solution was difficult to support because it did not have a graphical user interface – only text based CLI (command line interface). That would have been a big problem given the customer had no IT personnel at the branches. We needed something that was easy to deploy and manage.”

Sukraw says that Sangoma proved to be much more than a basic SBC solution. “It really boiled down to the added features. For example, it allowed the customer to do caller ID manipulation for certain numbers. That’s a feature that you wouldn’t normally expect from this type of technology.”

The implementation was rolled out in phases to ensure that each location was satisfied with the configurations they wanted before moving on to the next. “Unlike other solutions that would have required outside support, Sangoma SBC was something we could troubleshoot ourselves,” Sukraw says.

“The Sangoma SBC has lots of built-in troubleshooting tools and an easy to use web interface which was a big help in deployment. In fact, we got the base configuration up and running on our own; and with minimal help from Sangoma’s support team, we were able to configure all units with the exact requirements the customer needed.”

With the Sangoma units in place, the customer now has one system and one provider for all of its locations, leading to 40% reduction in voice costs. At the same time, the customer is able to maintain a centralized phone system that is much more convenient and easier to maintain, Sukraw says.

Since working on this project, BusinessWare has continued to use Sangoma SBC solutions for its VoIP implementations. “We’ve never had issues with it. Not only is the technology easy to deploy and cost-effective, Sangoma support has been awesome. They don’t just respond with a couple of lines and a link. They take the time to explain things to you. With the ever-growing demand for VoIP services, that counts for a lot.”