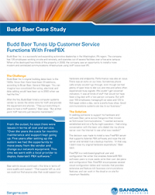 Budd Baer Inc. is a successful and expanding automotive dealership in the Washington, PA region. The company has 135 employees working on-site and remotely, and operates out of several facilities over a five-acre campus. When a fire destroyed two-thirds of the property in 2003, the company saw an opportunity to install a more modern and centralized communications infrastructure using VoIP (voice over IP).

Budd Baer Inc.’s original building dates back to the 1920s. Since then there have been 23 additions, according to Bryan Baer, General Manager. ‘You can imagine how convoluted the wiring, electrical, and data cabling would have been up to 2003 when we had the fire.”

After the fire, Budd Baer hired a computer systems vendor to rewire the entire store for VoIP, and provide the equipment and phones. “They put everything in place to have a VoIP system,” Baer says. “But at that point VoIP had only just become mainstream.”

From the outset, he says there were issues in terms of cost and service. “Over the years the costs for monthly maintenance and support kept going up. Five years after setting up the system we had the opportunity to move away from the vendor and change our network equipment. This time we went with a local provider to deploy Asterisk® PBX software.”


Baer admits issues continued – this time in terms of voice quality and support. “That supplier left us, and we could not find anyone else that could support our hardware and endpoints. Performance was also an issue. There was an echo on our lines. Sometimes phone calls simply wouldn’t go through, even though we had plenty of open lines to dial out; and inbound callers often experienced busy signals. We couldn’t get voicemail indicators. It was all kinds of stuff that would not have been a big deal with a two-person company. But with over 100 employees managing 8 car sales and 120 to 150 repair orders a day, we’re a pretty busy shop. Good communications systems are key to our business.”

In seeking someone to support his hardware and software Baer came across Sangoma (then known as Schmooze Communications). “I wanted someone established and not a fly-by-night operation. I had a long conversation with the team who dialed into my phone server over the Internet to see what was needed.”

The decision was made to install a new FreePBX server that supports Asterisk PBX software, and wipe the old server and reinstall it as a backup machine. “In that way I didn’t lose my original hardware expenditure,” Baer says.

FreePBX is a web-based graphical user and configuration file writer that enables Asterisk® PBX software users to more easily write their own dial plans and configuration files. FreePBX encompasses several visual configuration tables and modules that provides extensive and feature rich business communications features; and can work in the cloud or on site for maximum flexibility.

After running on FreePBX for just over two years, Baer says the improvements have been significant. In fact, things were going so well they decided to apply additional functionality, including integrating the phone system with invoicing software, and enabling automated appointment and parts-ready-for-pickup phone call reminders.

Between the time the dealership parted ways with the first vendor and installing the new system, the customer no-show rate would sometimes reach 30%, Baer explains. “The original vendor used to take care of outbound calls but it wasn’t part of the phone system, and customers were simply given a phone number and extension to call. With the fully automated system we have now, no show rates have dropped to our lowest ever at 5% because we can pull from our own lists to initiate calls.”

Today Baer estimates that the upgraded system initiates more than 100 automated notifications a day, whether it’s to schedule appointments, send out booking reminders, or notify customers that a part is in. “The customers are happy with it because they can easily reschedule or connect to a person if they need to by simply pressing a key. It saves lots of labour and ensures that our schedule is kept full.”

He says the effort added up to $6,000 in software costs. “But now our employees aren’t spending half their day on the phone. When you add in the labour and lost revenue, we were made whole within six months,” Baer says.

Baer is looking for more integration options for his FreePBX system as his needs evolve. A more recent addition in the works is integration with the customer relationship software from Carr Research that allows them to look at client records and provide customer service reports.

“We’re starting on click-to-dial and history pool functions for inbound calls,” Baer explains. “In that way, a service adviser can intelligently talk to the person without having to ask a whole lot of questions because they can instantly see their history.”

Baer’s next project with Sangoma is a fully-integrated cordless phone solution for deployment in the collision center. “Estimators spend a lot of time in the lots and shops appraising damage so they roam a large area. With cordless phones they can talk to each other anywhere within the five-acre campus without losing information on the customer or vendor they’re talking
to. That’s something we simply couldn’t do with our older system.”