Social Networking Made Possible For The Sight-Impaired 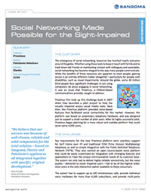 The emergence of social networking resources has touched nearly everyone around the globe. Whether using these tools to keep in touch with family and to track down old friends or maintaining contact with colleagues and associates, social networking has become integral to the way many people communicate. While the benefits of these resources are apparent to most people, gaining access is an entirely different matter altogether—particularly for people with disabilities, such as visual impairments. Around the globe, some 39 million blind people face significant challenges in just using computers, let alone engaging in social networking.

It was an issue that Proximus, a Chilean-based communications provider, sought to address. Proximus first took up this challenge back in 2007 when they launched a pilot project to help the visually impaired access social media tools. Back then, the Proximus platform provided voice-based features that facilitated social connectivity for this market. However, the platform was based on proprietary telephony hardware, and was designed just to support a small number of pilot users. After its highly successful pilot, Proximus began planning for a more robust and scalable platform that could serve some 4,000 users.

Key requirements for the new Proximus platform were seamless support for VoIP (Voice over IP) and traditional TDM(Time Division Multiplexing) telephony, as well as simple integration with the Public Switched Telephone Network(PSTN). They also wanted an open source-based voice platform that could be easily customized for integration with emerging features and applications to meet the unique communication needs of its customer base. The system not only had to deliver highly reliable connectivity, but the voice quality – delivered to vision impaired users – had to be of the highest order, since voice is the only interaction option available to these consumers.

The system had to support up to 240 simultaneous calls, provide individual voice mailboxes for more than 4,000 subscribers, and provide multi-party conference calling services. The final requirement, and one that increased the complexity of the project significantly, was that system management and administration had to be accessible by the Proximus system administrators, who are also visually challenged.

We believe that our success was because of well-chosen, reliable and solid components for the total solution – based on Sangoma, Elastix and PaloSanto’s appliances all integrated together with specific, original development.

With the challenges and specifications for the new platform well in hand, the professionals at Proximus selected the Elastix open source-based telephony platform as the foundation for the new system. They also engaged Ecuador-based PaloSanto Solutions, a leading Elastix integrator in the region with an established reputation for turning ideas into commercial solutions, to provide the hardware components, custom development, and complete system integration.

Elastix is a flexible unified communications software platform that is distributed under an open-source licensing model. PaloSanto Solutions had extensive experience with building high-performance commercial products using the Elastix platform and integrating it with a wide variety of servers, VoIP hardware, and PSTN gateway cards. In a number of these projects, digital telephony cards from Sangoma contributed high degrees of reliability and voice quality to the final product. These previous experiences led them to select the Sangoma A104D digital telephony card to provide the fourE1 spans required to meet the requirements of the Proximus platform.

“Sangoma proved to be a highly reliable choice,” said Paul Estrella, head of product development at PaloSanto. “As we worked closely with Proximus to design the final solution that would meet the performance requirements for the platform, we knew from the start that Sangoma cards were the best option for IP-to-TDM and PSTN integration.” 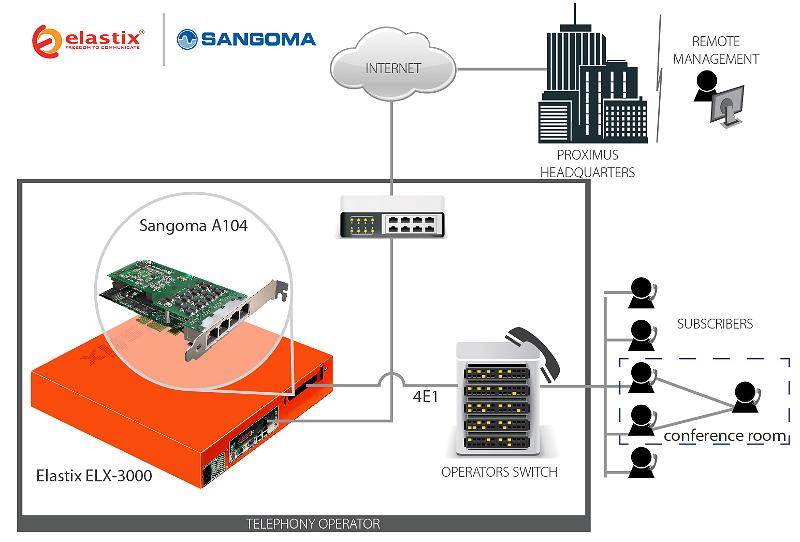 Sangoma’s field-proven integration with Elastix, application notes, and design guides helped to ensure simple integration of the voice and gateway functions in the Proximus platform. The inherent quality of the Elastix software and selected Sangoma hardware contribute to the reliable operation of a platform that has had virtually no downtime and processes nearly 2 million voice minutes per month.

“The voice hardware actually became the easy part of this project” continued Estrella. “This, in turn, allowed our team to concentrate their efforts on other parts of the development to create the features and applications that dramatically expand the value of the system.”


Our social network is having the desired effect, with a sustained growth in both the user database and the monthly minutes processed. Technically, the solution demonstrated a dramatic stability at almost 100% of activity time and 2 million minutes processed per month without any problems. The solution provided by PaloSanto Solutions is constantly adapting to newer and more difficult user requirements, such as blind people who are guided only by sounds.

Elastix is a Unified Communications and VoIP Telephony platform integrating the best available tools for Asterisk-based PBXs into a single, easy-touse interface. It also adds its own set of utilities and allows the creation of third party modules to make it one of the best software packages available for open source telephony today.

Headquartered in Guayaquil, Ecuador, PaloSanto Solutions is a leader in open source innovation and new technology in Latin America. They began operations in 1999 and have gained worldwide recognition and respect for their Elastix IP-PBXsolutions that went into distribution in 2006. PaloSanto has built a global network of distribution partners and resellers in the Americas, EMEA, APAC, and Oceania.