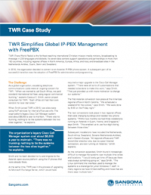 TWR (Trans World Radio) is the farthest-reaching international Christian mission media ministry, broadcasting its message in 230 languages and dialects. Its seven data centers support operations and partnerships in more than 160 countries, including regional of ces in North America, Europe, Africa, and Asia; and broadcast sites in the Netherlands Antilles, Guam, Benin and Swaziland.

In 2010, the organization decided to convert to an Asterisk IP-PBX phone system. A subsequent part of its successful transition was the adoption of FreePBX for administration and programming.

As a global organization, escalating telephone communications costs were an ongoing concern for TWR. “When we wanted to call South Africa, we paid standard international toll fees using regular commercial trunking,” explains Cassius C. Smith, senior project consultant for TWR. “Each of ce still had their own vendors for local dial tones.”

When Smith joined TWR in 2010, two sites were using VoIP services for internal of ce use only. The organization’s legacy Cisco Call Manager system cost about $8,000 a year to maintain. “There was no trunking; nothing to tie the systems between the two sites together,” he explains.

The organization’s legacy Cisco Call Manager system cost about $8,000 a year to maintain. “There was no trunking; nothing to tie the systems between the two sites together,” he explains.


Smith and his team decided to try and migrate to the Asterisk open source platform using the IP phones that were already there.

At the same time, TWR was in the process of upgrading its Microsoft Exchange Server, which would have required a major upgrade to the Cisco Call Manager system. “There were all sorts of customizations that needed to be done to make this work,” says Smith. “That just provided us with more motivation to change our systems.”

The first Asterisk conversion took place at the Americas regional office in North Carolina. “We scheduled a weekend for the cutover,” says Smith. “We were done by 9:00 on the Friday night.”

The next conversions took place in two regional offices that were changing buildings and needed new phone systems. “Within two months we had three installations running on Asterisk in Guam, Vienna, and Singapore,” says Smith. “This enabled us to use four-digit dialing between those sites.”

Subsequent installations have included the Netherlands, South Africa, Swaziland, Bonaire (Netherlands Antilles), and in Eastern Europe. “All regional offices and TWR transmitter sites but one, due to a poor Internet connection, are now running on Asterisk,” Smith explains.

As the conversion expanded, Smith found it increasingly difficult to manage the systems over multiple time zones and locations. “I would rarely get time off because there was always something going on,” says Smith. “The Linux command line interface used to manage the systems is a challenge for junior Windows IT staff. In many regions we have limited staffing and those that are there wear multiple hats.”

Smith realized he needed an easy-to-use, Web-based graphical user interface (GUI) that would be intuitive for junior support staff to use for deployment and programming. “I knew I had to have a GUI solution in order to get help from junior IT personnel and overcome my time zone challenge,” says Smith. “We started looking at Sangoma FreePBX based on a vendor recommendation. I realized it was a very powerful tool that would make provisioning and managing phone systems much easier.”

FreePBX is a PBX ecosystem that offers Asterisk functionality and much more, he adds. “It lets you use GUI for nearly all administration functions, including intrusion detection, user access to voice mail, recordings and greetings, and much, much more.”

The first FreePBX installation was in the TWR’s eastern Europe site. “I can now set up time conditions for each of ce to use with a press of the button, and delegate maintenance tasks,” says Smith. “Our staff in in remote locations really like the Web-based access because it allows them to program systems themselves.”

With Asterisk and Free PBX, Smith is able to manage the phone systems all over the world from a central location. The best part of having the system in place is that Smith can now easily ful l requests for features.

“Whenever users come in and ask if something can be done with the phone system, I can nearly always say ‘yes, of course.’ I can make the system do what they want it to do. There are virtually no limitations.”

The overall return on investment has been impressive. The entire rollout cost approximately $49,000 for a total for 442 endpoints, all of which can now connect with four-digit dialing. “Being able to do this at $100 per endpoint is phenomenally cost-effective for an enterprise-class phone system, especially when you consider that a typical endpoint cost is between $1,200 and $1,500 per seat, plus maintenance,” says Smith.

“Bringing together FreePBX software and phone provisioning makes it all very manageable,” says Smith.
“Other than that, it just works! FreePBX has been a life saver. I’m a big fan.”