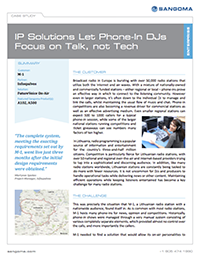 Broadcast radio in Europe is bursting with over 50,000 radio stations that utilize both the Internet and air waves. With a mixture of nationally-owned and commercially funded stations – either regional or local – phone-ins prove an effective way in which to connect to the listening community. However even in larger stations, it’s often down to the individual DJ to manage and link the calls, whilst maintaining the usual flow of music and chat. Phone-in competitions are also becoming a revenue driver for commercial stations as well as an effective advertising medium. Even smaller regional stations can expect 500 to 1000 callers for a typical phone-in session, while some of the larger national stations running competitions and ticket giveaways can see numbers many factors of ten higher.

In Lithuania, radio programming is a popular source of information and entertainment for the country’s three-and-half million citizens. Competition is particularly fierce for Lithuanian radio stations, with over 50 national and regional over-the-air and Internet-based providers trying to tap into a sophisticated and discerning audience. In addition, like many radio stations worldwide, Lithuanian stations are constantly being tasked to do more with fewer resources. It is not uncommon for DJs and producers to handle operational tasks while delivering news or other content. Maintaining efficient operations while keeping listeners entertained has become a key challenge for many radio stations.

This was precisely the situation that M-1, a Lithuanian radio station with a nationwide audience, found itself in. As is common with most radio stations, M-1 hosts many phone-ins for news, opinion and competitions. Historically, phone-in shows were managed through a very manual system consisting of various completely separate elements, which provided almost no control over the calls, and more importantly the callers.

M-1 needed to find a solution that would allow its on-air personalities to seamlessly handle call-ins, while enabling them to handle multiple operational tasks simultaneously and improve studio control of caller interactions. After careful assessment of multiple providers, M-1 concluded that Infospalvos possessed the right technical knowledge and solutions to help improve the station’s core business needs and meet the target objectives.


The complete system, meeting the exacting requirements set out by M-1, went live just three months after the initial design requirements were obtained.

The solution not only needed to address the operational needs of the various program types, it also had to be easy to use for the DJs and producers working the phone lines. On-air personalities needed to maintain focus on the content of the program, not on manipulating technology. In addition, M-1 wanted a solution to be fully developed, or ‘field-tested’ by the on-air staff, and deployed in a very short timeframe. The solution also had to integrate with the existing Siemens PBXwhich provides basic telephony services to the studio and business offices.

The overriding requirement was to make the functional interface simple yet comprehensive, as the DJs operating the systems do not have the time or inclination to learn complex IT systems and workflows that can distract them from the on-air conversations. As well as the simple routing and queuing of incoming calls, the system needed to handle various databases for call histories, listener records, and prize information. An important requirement was also to provide the ability to blacklist callers who’ve regularly shown that they can’t be trusted with live on-air comments!

Since a key requirement for the new application was to seamlessly integrate with the Siemens PBX, Infospalvos turned to its long-time and trusted technology partner Sangoma to source the telephony interface cards needed to interconnect its FutureVoice On-Air solution server with the PSTN and PBX. This was an area of key advantage for Infospalvos because of Sangoma’s reputation for providing seamless interface between disparate systems. “We knew that Sangoma had unrivalled expertise in PBX connectivity, and specifically, it had multiple examples of successful connectivity to Siemens PBXs,” explained Martynas Spokas, project manager for FutureVoice On-Air with Infospalvos. “Our experience with the reliability and robustness of the Sangoma cards gave us confidence that we didn’t have to worry about interoperation and could concentrate our efforts on the crucial user-facing areas of the design.”

To meet the fundamental requirements of enabling the ability to simplify interaction between the various incompatible database systems and manage call-flow between any of the main voice network endpoints or hubs, FutureVoice On-Air is designed using Sangoma cards which provide E1 connections to both the PBX and the external PSTN network. Uniquely, it’s an absolute requirement to hand the calls destined to go on-air to a mixing desk in order to be broadcast. The mixing desk console is then managed by the DJ or producer to control whether a caller is put on air or not. After investigation, it was decided that VoIP was the best technology to accomplish this portion of the call management process. The Sangoma cards’ inherent support for Session Initiation Protocol (SIP) as well as all common ISDN formats made the VoIP implementation simple and efficient. The FutureVoice On-Air system supports both E1 and BRIPSTN interfaces using Sangoma ISDN PRI A102DE and ISDN BRI A500DE cards.

DJs like to see how many times callers have previously dialled the station and even whether they’ve previously been on-air or won prizes. In fact, the whole system has been designed for live administration of the data. For example, the producer can remove the blacklist tag from a caller to allow calls to go on air with just a single command on the administration screen. Through this technology, M-1 can conduct the transfer of voice into the studio through just a simple single button push.

Future Voice On-Air was designed in an astonishing 8 weeks and then fully implemented within a test studio for feedback and fine tuning. Further enhancements were made to work with the data structures and improve the user interface followed by substantial end user testing, performance testing and finally security testing – all of which were passed with flying colours. The system is capable of handling up to 100 simultaneous callers wanting their airtime, although most DJs are more than content with 5 or 6 queued and waiting at any one time! 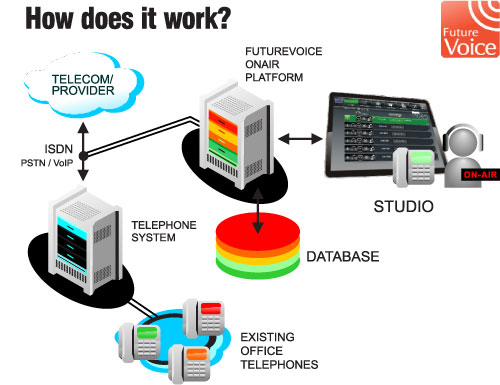 “Radio phone-ins are an extremely critical environment where everyone notices the smallest mistake or problem, a talk show without voice is meaningless,” noted Spokas. “The decision to use Sangoma was virtually an automatic choice because of Infospalvos’ previous extremely positive experiences combined with Sangoma’s reputation for quality and reliability. And the integration with both the PBX and the service provider network was completed quickly and easily with the Sangoma auto-detection capabilities and well-documented configuration guides.”

FutureVoice On-Air is also proving extremely adaptable to address other specific requirements that a radio station may have. The product has proved extremely successful and is now the subject of interest from other radio stations beyond Lithuania. Infospalvos is well positioned for this emerging market and exudes confidence when it comes to their interfacing ability, not least due to their positive experiences with Sangoma products. “We know the entire Sangoma product range extremely well now after using almost all of the products over the years,” concluded Spokas, “And, more importantly, we know just how critical of a role they perform for us in the network. It’s a role the cards perform quietly, efficiently and we know we can rely on them.”

Being based in Lithuania, which has among the highest fibreto- premise penetration in Europe, Infospalvos had been providing cutting edge voice solutions since 2005 and is well positioned to capitalise on the growth in this region. Its roots lay within Lietuvos Telekomas, the largest landline operator in Lithuania which is part owned by TeliaSonera. Infospalvos serves major customers in Lithuania, such as Carlsberg and the primary Telco Teo LT, as well as to a diverse and growing customer base in areas including Latvia, Russia, Belarus and many other former Eastern European block countries.